French Montana “Chinx & Max/Paid For” is a two-part, nine-minute tribute to his best buddies, the departed Chinx and the incarcerated Max B. “Paid For” ft. Max B & Chinx Drugz is one of the most anticipated song of French’s album ” MC4 “. The story behind this legendary record started 7 years ago in a small home studio in the Bronx.

French Montana‘s new album “MC4” includes the track “Paid for” featuring Max B (@MaxB140) and Chinx Drugz (@ChinxMusic) which has been produced by Harry Fraud (@HarryFraud),  The Alchemist (@AlanTheChemist) and Masar (@MasarTv)

Although he has officially scrapped MC4 following sample issues and leaks, French Montana has decided to pay tribute to two of his closest friends with a holdover from the album, “Paid For.”

With Max B (who is coming home from prison sooner than expected) and the late Chinx, the Harry Fraud, Alchemist and Masar-produced song could have been one of the best songs from the album that, sadly, never will be. 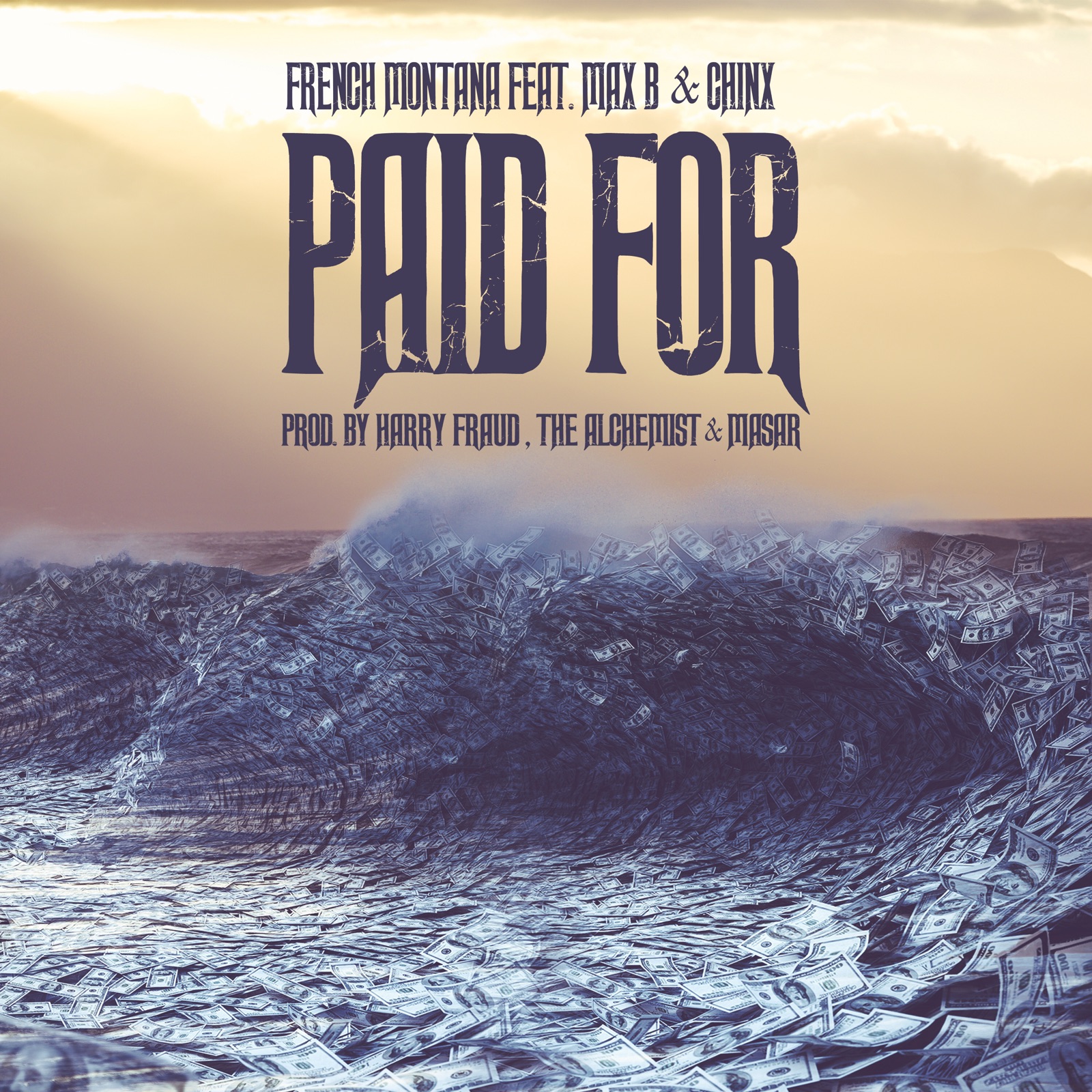 French explains why putting “Paid For” on MC4

“Putting ‘Paid For’ on the album is very important because Max B and Chinx represent everything that I am,” French explains. “They my brothers and I miss doing it with them. I feel like we came in the game together, we supposed to finish it together. And it’s unfortunate that things had to go the way they went because you know, they supposed to be right next to me. Sometimes it just seems fake to me because we supposed to be doing this together and God just took them away from me. Me just having them is keeping my brothers’ name alive and keeping the whole Coke Boy movement alive. Me putting them on there it means a lot to the fans, it means a lot to me, it means a lot to the culture.” 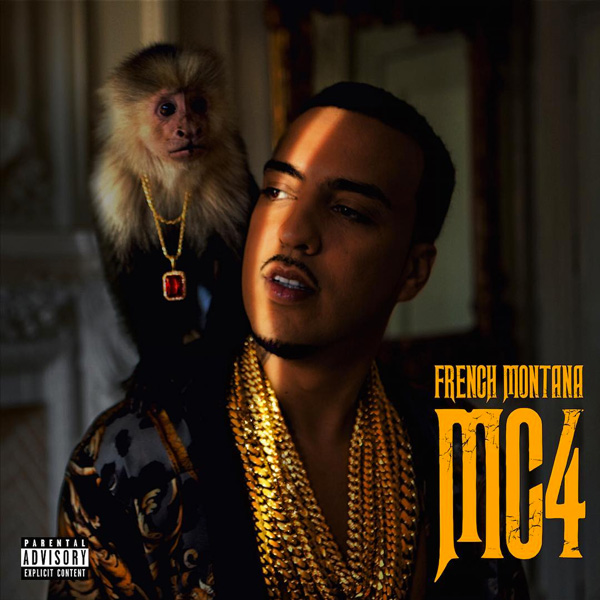 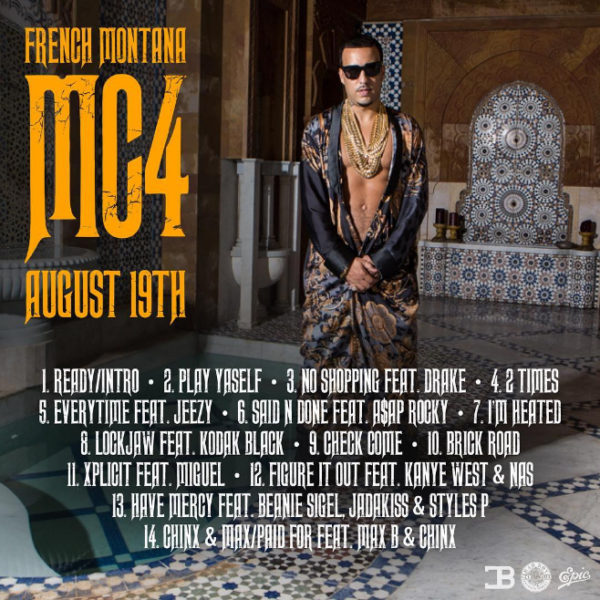 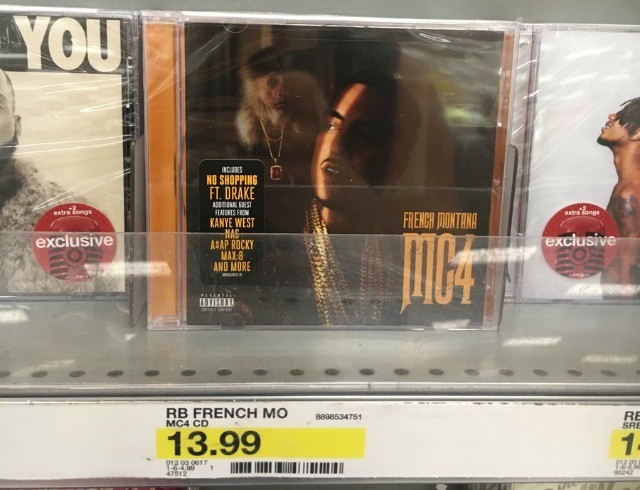 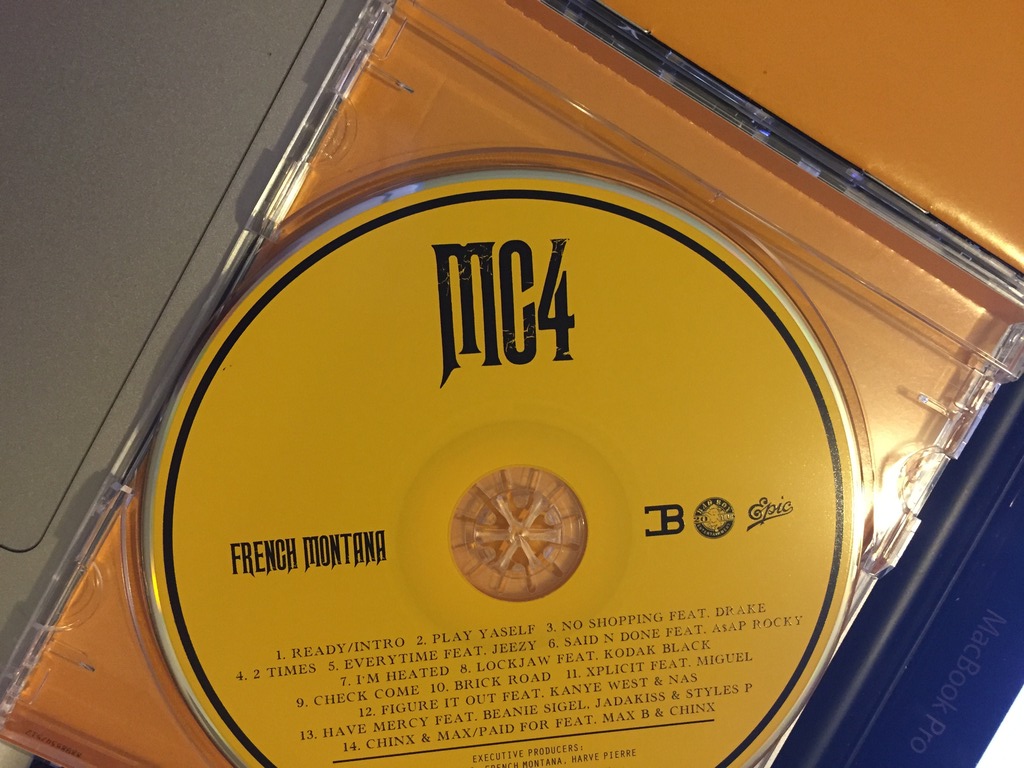 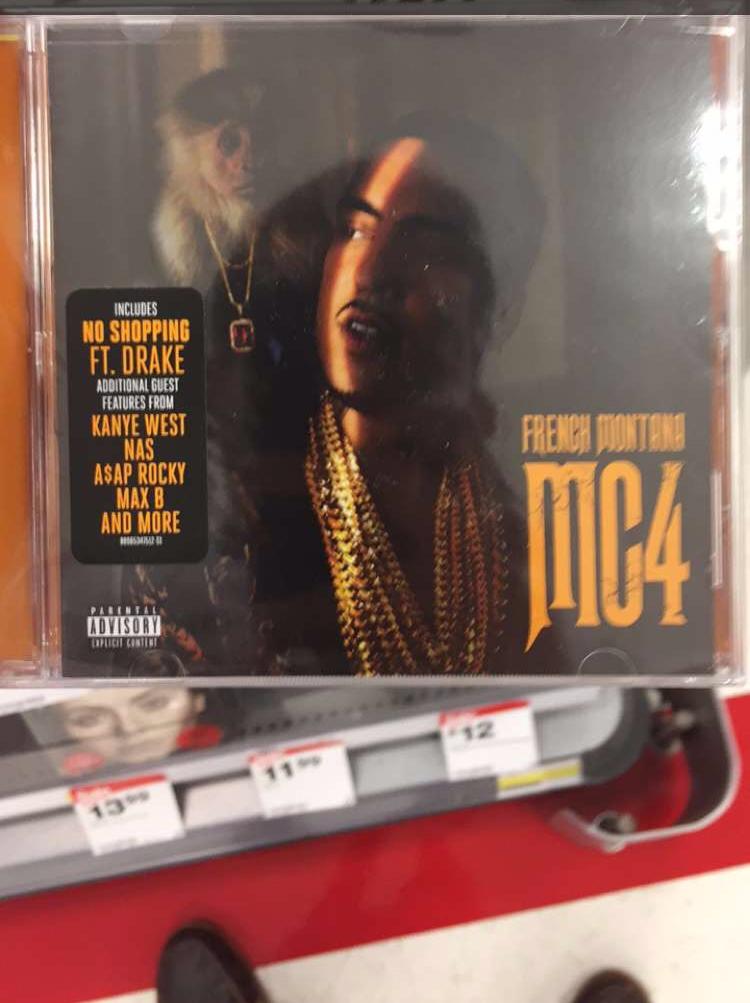 MAX B WRITING HIS LYRICS FOR “PAID FOR”

Max B’s verse on French’s album “MC4” was recorded in 2009 by his engineer Masar just a few days before he was taken away. The original Pro Tools session was kept unreleased among others tracks like the “Hey my guy” single which was on Montana’s first album “Excuse My French”.

This picture was taken in 2009 just a few days after the release of the “Coke Wave” mixtape. A captured moment after one of the numerous recording sessions between French Montana & Max B that took place at Max’s second home studio which was located in Yonkers.

FRENCH LISTENING TO THE MAX B’ S VERSE

In 2015 Masar brought the Max B’ s verse to French Montana at the Daddy’s House recording studio. French who wasn’t present at the time Max B recorded his verse, finally heard it for the 1st time, in almost 7 years after its original recording.

HARRY FRAUD & MASAR WORKING ON THE INSTRUMENTAL OF “PAID FOR”

When Masar was called to help bringing the Max B’s verse to life, Harry Fraud & The Alchemist had already lay down the foundation of the “Paid For” Instrumental.

These photos was taken during the recording of Chinx’s single “I’m a coke boy”. Harry Fraud who shared many studio sessions with the late Chinx Drugz, knew exactly how to bring out the best of him. 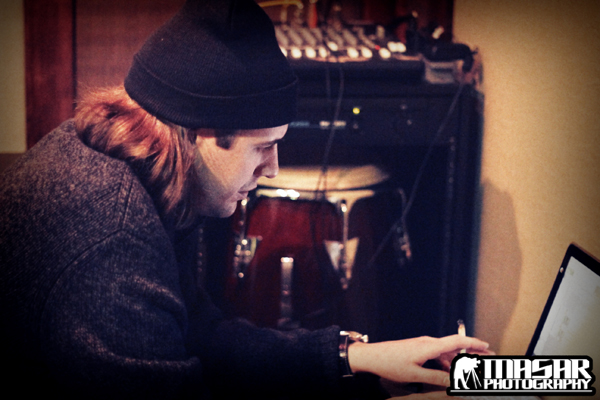 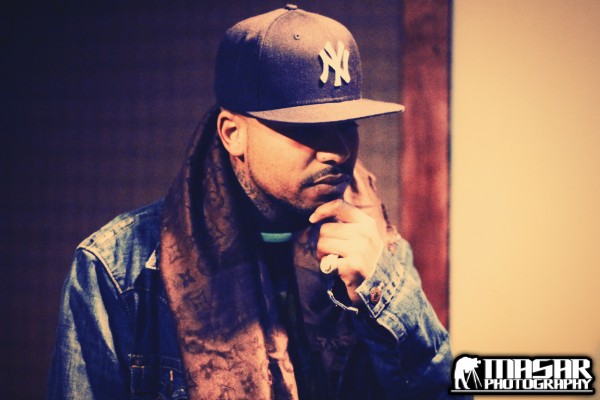 FRENCH MONTANA & HARRY FRAUD DURING THE RECORDING OF “MC4”

The duo of French Montana and Harry Fraud have brought us countless quality collaborations in the past and “Paid for” is one of them. This record is legendary because it features Max B, the originator of the wave, and Chinx Drugz the late young king.

The Splash Brothers… @frenchmontana #MC4 on the way 🌊

Masar is no stranger to the wave, beside being Max B’s personal music engineer and right hand man, he has collaborated numerous time with French & Chinx on different projects, either as a Music Video Director or as a Graphic Designer.

Harry Fraud and Masar at the Surf School Recording Studio putting the final touches to the mixing of the record.

I had some great time yesterday working at the SRFSCHL studio with my guy Harry Fraud. S/o to Fred, Rico, Cos, Dan and Phaseone.

SRFSCHL studio with Harry Fraud for an other productive night. 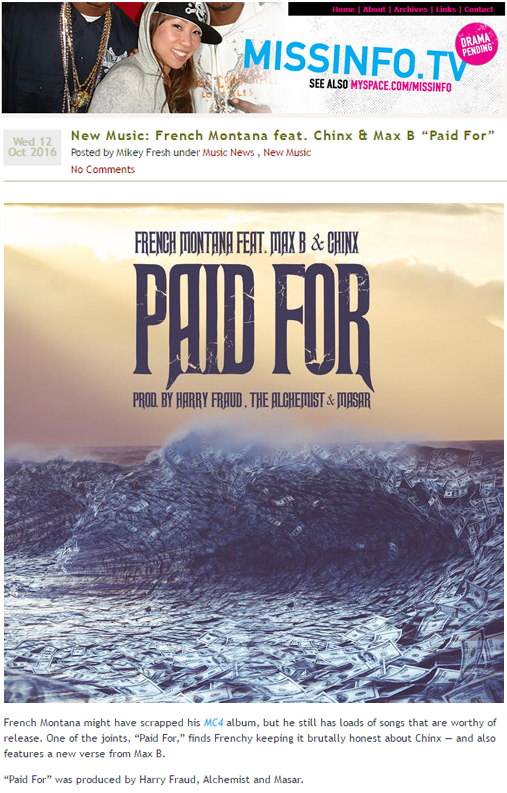 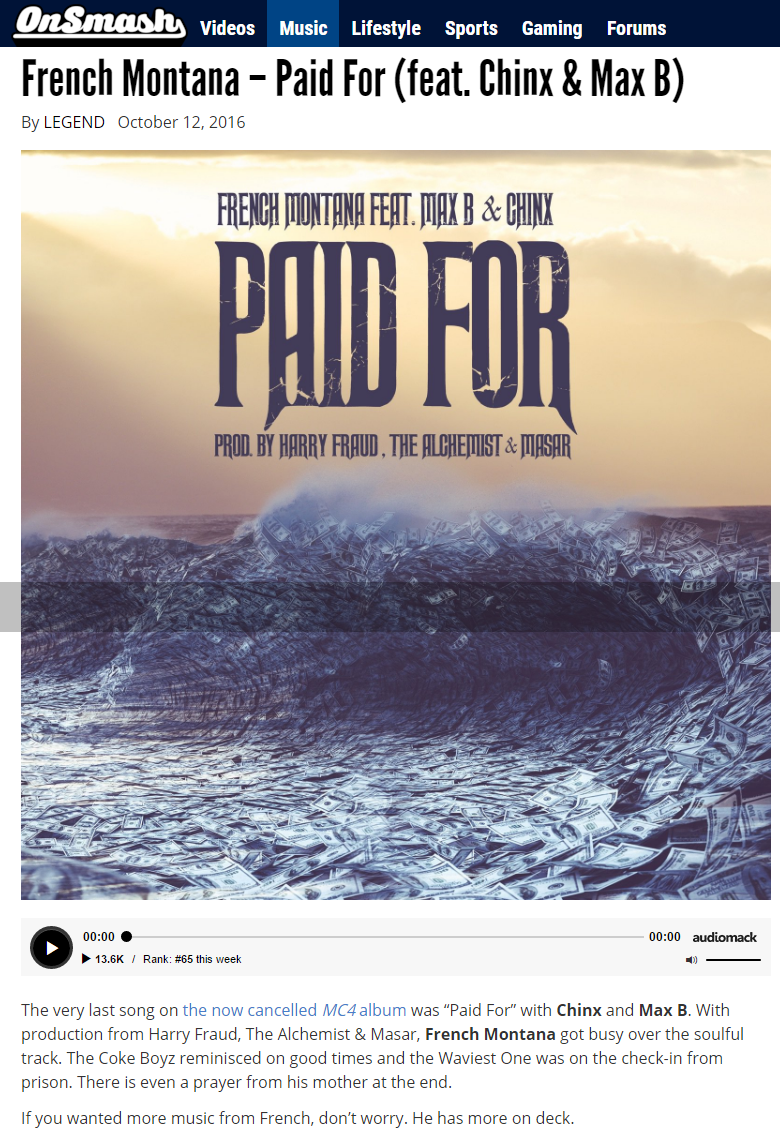 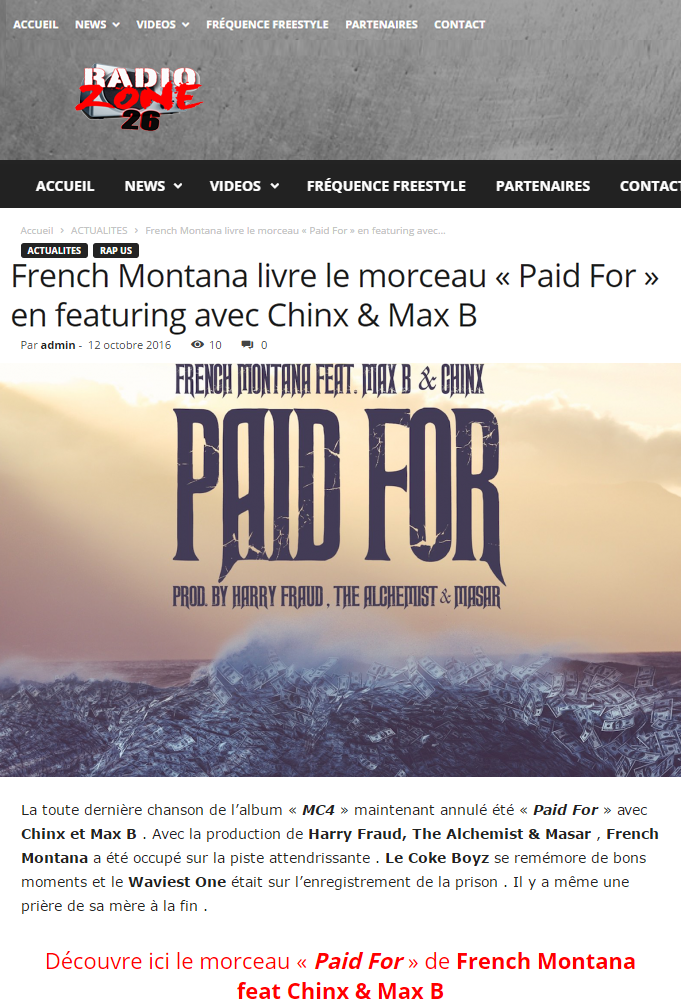 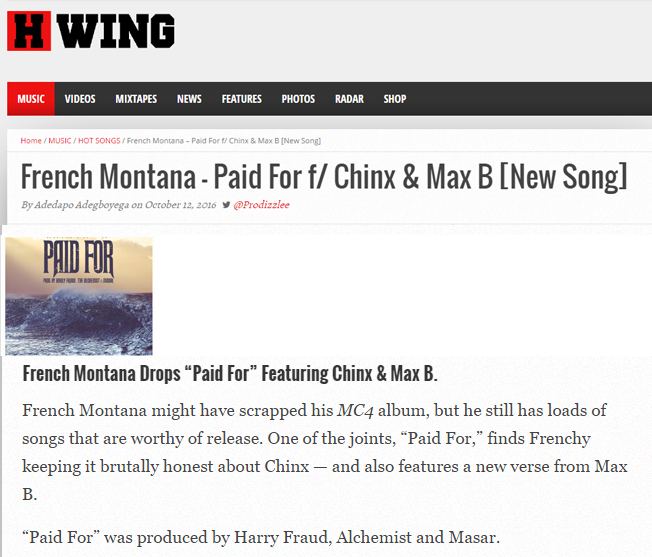 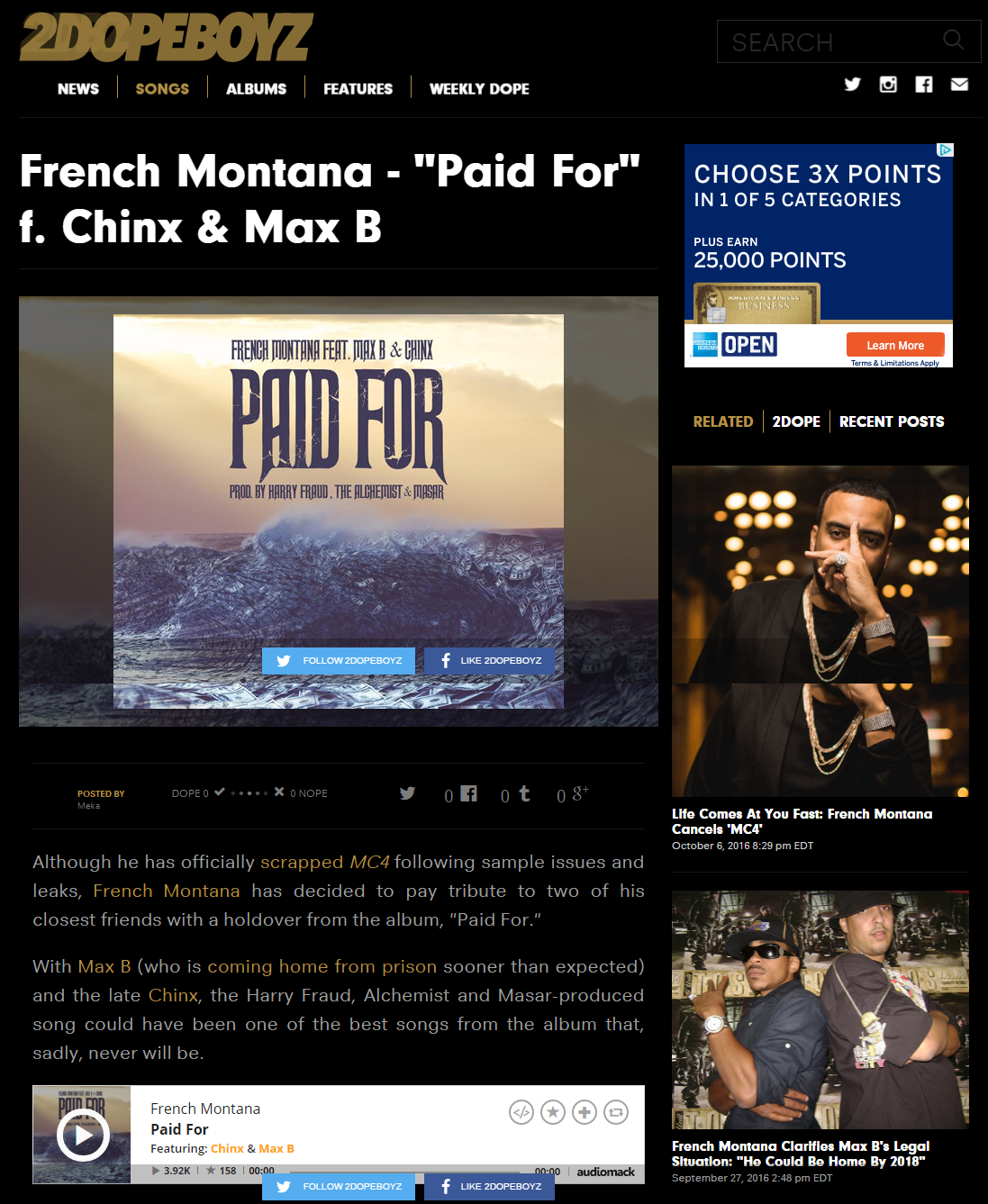 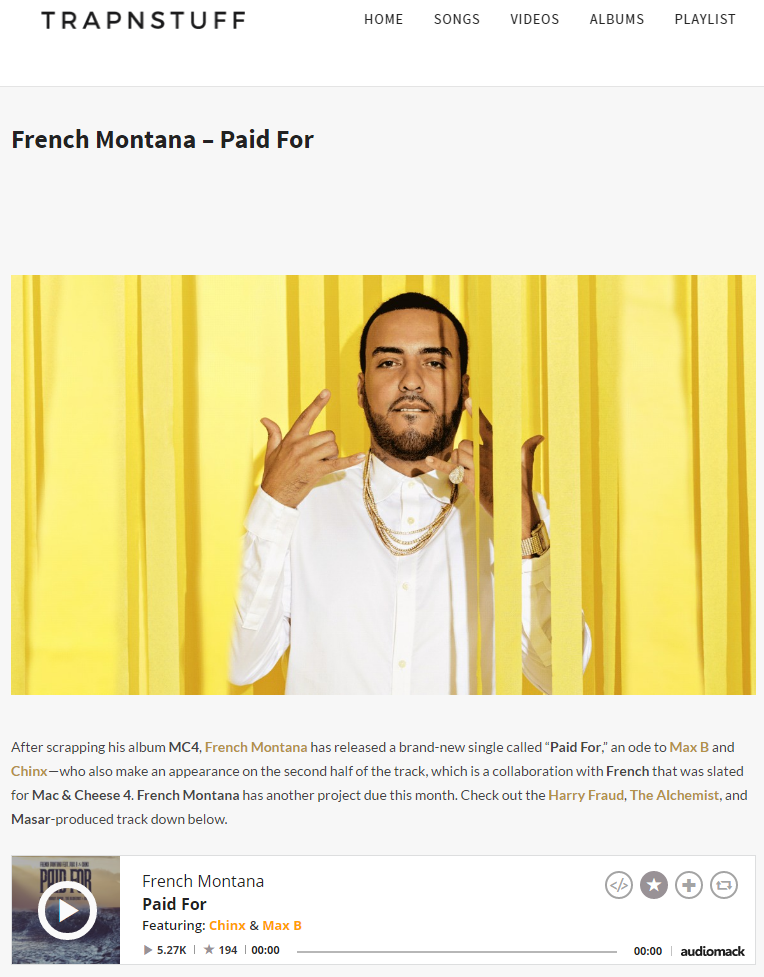 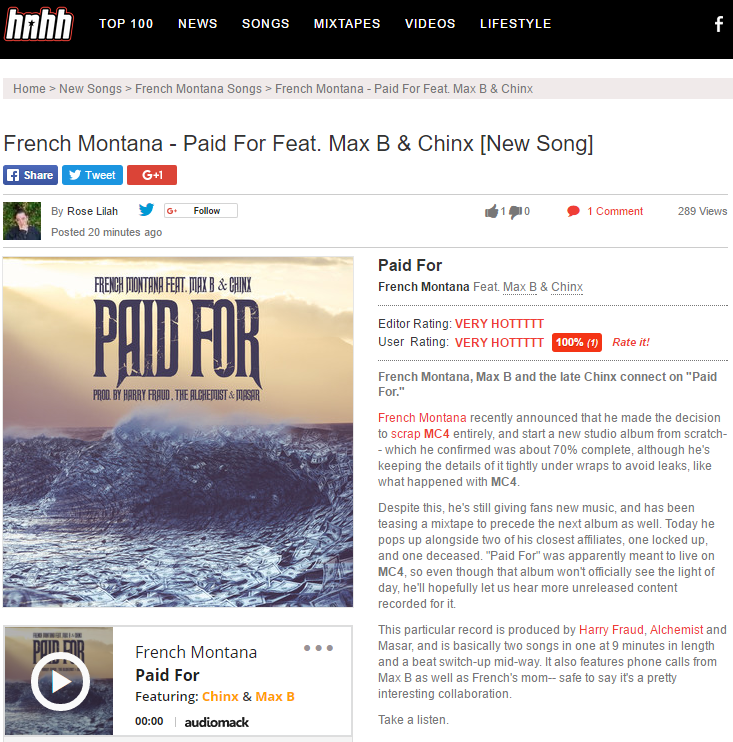 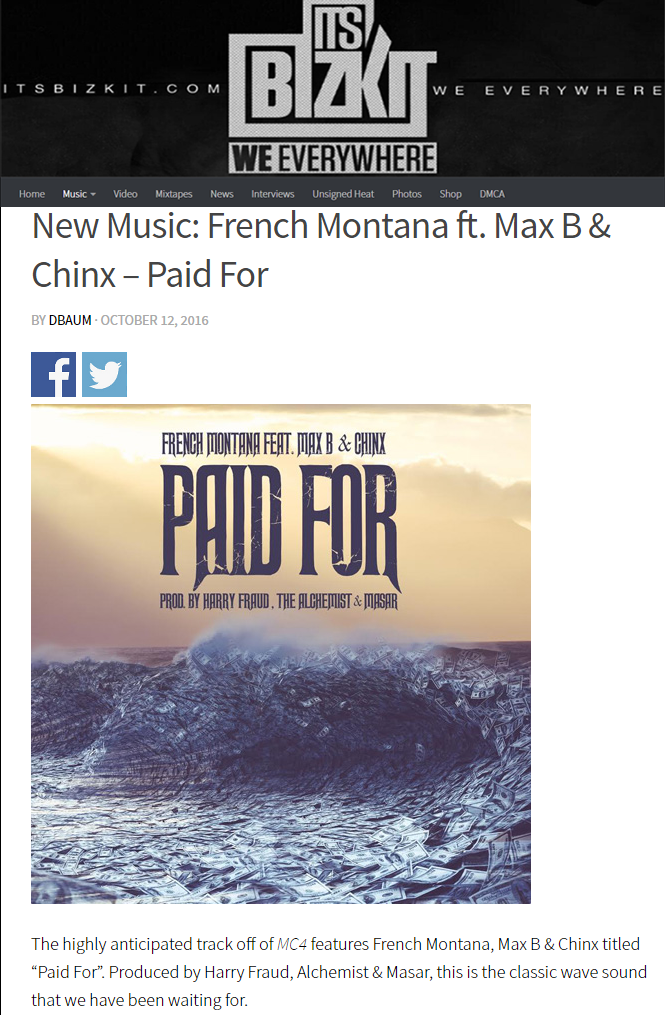 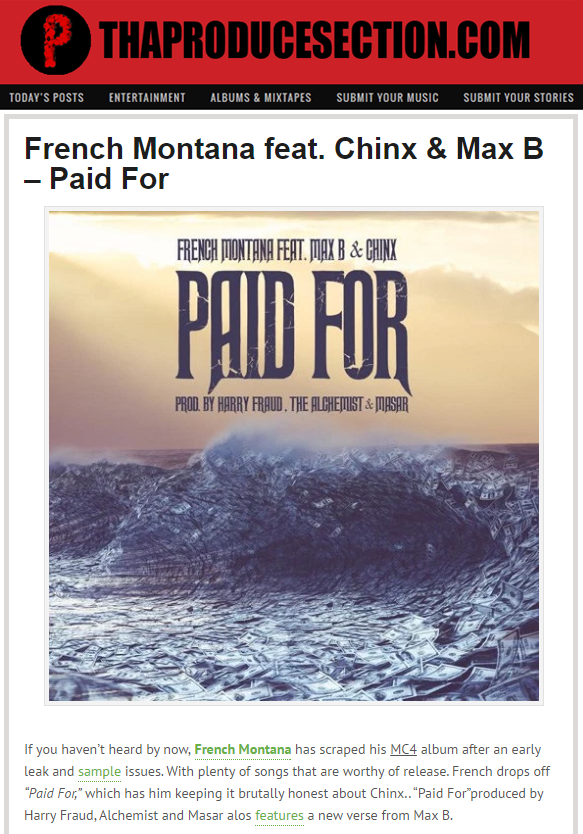 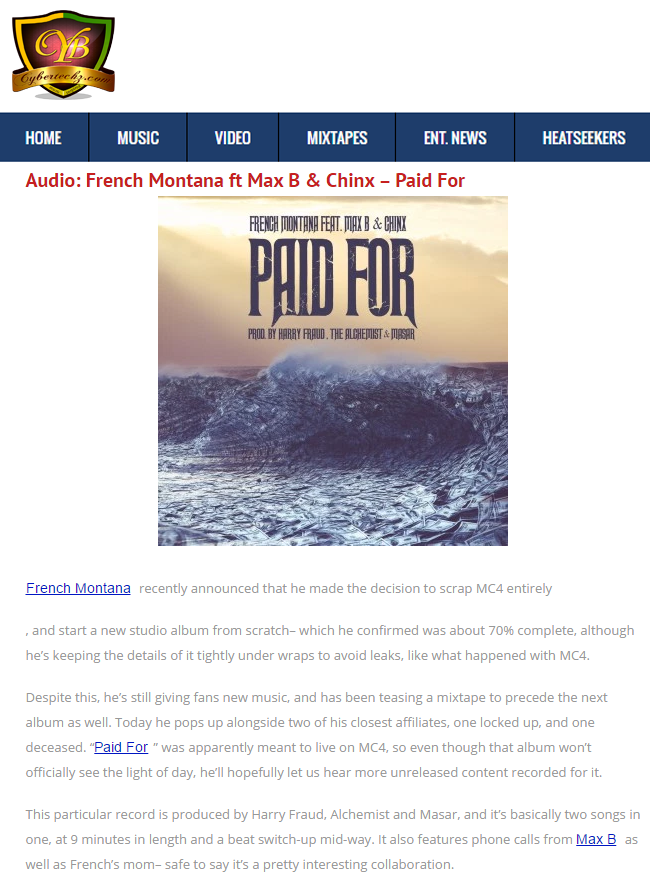 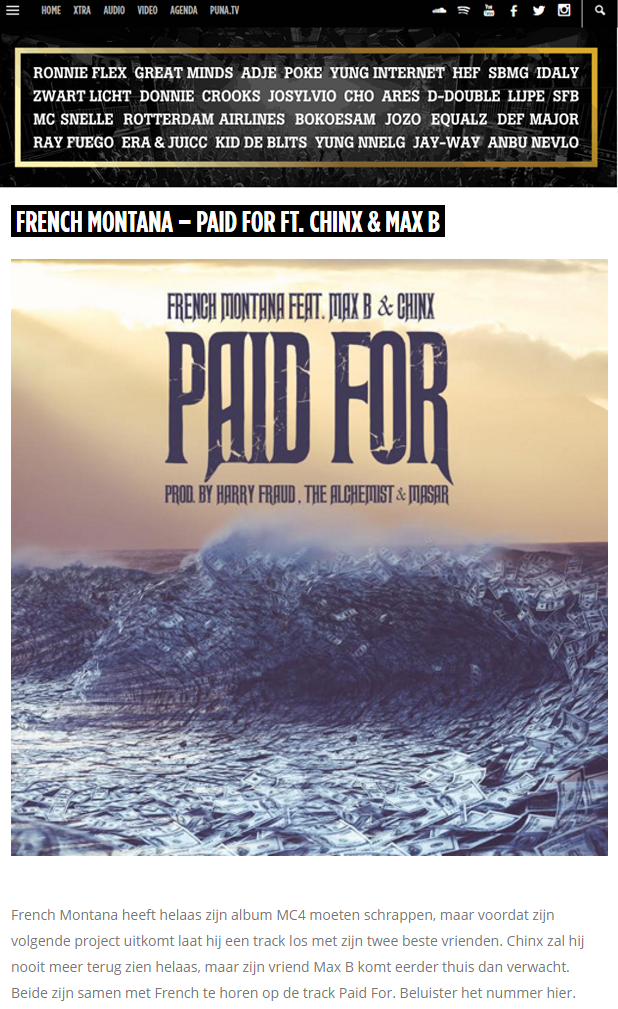 [Chinx:]
That’s my nigga man, that’s my bro
I saw him last night drunk out his ass

[French Montana:]
It’s hard to do this, I ain’t gonna lie
Soon as you came home, took you on tour
Leave the streets, do whatever for you lil boy
Fast money, bad bitches, livin’ in a rush
Now worse when you love somethin’ death can touch
Sometimes life hurt more than death homie
Locked up Max, took Chinx, I’m last one left homie
Told you stack [?]
You looked at me and laughed, you ain’t care
I remember we recorded I’m a Coke Boy
You lit the city up, I told you get that dough boy
I mean we both from the bottom with the same dreams
Why I felt the same rush when you copped your first V
Starin’ at my phone waitin’ for your phone call
I see your face every time I see your lil boy
Life pleasant, death peaceful
Transition, That’s the trouble some comin’ where I’m comin’ from
Why blood bleed memories nobody steals
Death leave heart ache, nobody heals
In my own zone drinkin’ till I’m feelin’ woozy
Knowin’ I’m a die, remind me there ain’t nothin’ to lose

[French Montana:]
Damn! how to start this off
One time to the boss don, coke wave boss, damn!
Gave my nigga seven-five, damn!
They tried to kill my dog alive
Wavy, it’s a law fightin’ for your life
We live like it no tomorrow, I pray for you at night
Time flyin’, it’s been 7 years
While time flies fake friends disappear
Fast money, fast cars, lived it to the most
Penthouse at the Chinx, Max, nobody close
Told you focus on the money, fuck the problems
But once you hit the Henny, you the wildest
Remember when you finger popped the joint, found a condom in her?
And you still hit her? crazy!
They thought I was done when they locked you up
Ha ha, turn the city up
Tried to bury us but didn’t know we were C’s
International superstars overseas
Despite all our obstacles, against all odds
Keep your eyes on the prize and your faith on God
Every week talk to your mother
I see your baby boy gettin’ older
Until you get the appeal we gon’ fight homie
Spit that Coke Wave Boys for life homie
Montana

[Max B’s mother:]
(Just say a prayer for us, you ready ma?)
Oh father God we come to you right now. To bring Karim, aka French Montana, and Charlie aka Max B. Bring them both to the altar, lord God, to give them to you. I give them to you lord God, to keep him safe as I know that you do each and every day lord God. We ask you to give them wisdom, to use in a good way, lord God that will help them in their future concernin’ their children, their children’s mothers, for their children are the future and their children’s children are the future future
So father God, we ask you lord God to anoint their music, anoint their thoughts, their dreams, their aspirations, oh God. And to speak to them always, oh God, as we know that you do but let them know lord God that when you’re speaking to them that you already spoke to them and that you always speak to them. It’s just a matter of them listening. So father God we ask to carry them through both separate situations under two different circumstances, lord God
And we ask you in your son’s name lord God to allow them to apply whatever it is they need to apply in their life, lord God, to make it better for them. And better for the music world, lord God. In this we say, we pray, Amen
(Thank you ma, hold on for a second ma)
You like that one?
(Yeah I loved that one ma)
I want to say one more thing

[Max B:]
Oww!, spark them phony fucks from deep
I’m a put them fucks to sleep
Quarter million in my jeans
These bitches praise my dick
Penthouse, he in that six

Oww! We in this bitch
They raided on my cuh
They takin’ all my bucks
They be rapin’ all my sluts
Oww!, Maxie don’t like him
They got me all tightenin’
Even papi got that 10
Yeah I hit you niggas with that shotty pump
Leave you on that body slump
Shittin’ on yourself
I put them bitches in the ground
I flip them with the pound
I’m empty, I need another round

[French Montana:]
Every thing is paid for
She bust it open like I paid for
Baby tell me what you came for
Make sure you won’t leave without
Wanna see you smile
Do it, don’t try
Designer shit, wanna see you fly
Live it up, thinkin’ bout the time

[Chinx:]
Look these niggas wishin’ on a fallen star
Double park the Vanquisher and hop into a different car
We spend money like a whirlwind
Chinx Drugz don’t crack, smack a nigga [?]
Your girl went down and never came up
These niggas need to hang up
Three Jewish lawyers on retainer
These liars never tell the same story twice
Been a sucker all your life
Yellow gold stones dancin’ off the lights
Fuck your life
These niggas ass bent for life
Don’t touch the dice
Never felt the fire till you touched it twice
What’s the price?
Kush burnin’, cruise control
Everyday’s a big game for me like the Superbowl

[French Montana:]
Uh, thinkin’ bout you, couldn’t even sleep
Man thinkin’ bout you, couldn’t even speak
All the confusion had me in the Mosque Friday night
Tryna find a peace find but couldn’t find a piece of mine
Moral to the story, the story got no morals
Cause the real gon’ struggle while the suckers get the glory
It’s a new day, she trippin’ off a D’usse
Try and hit me with the lemonade when I met her drinkin’ Kool-Aide
Tryna be rich and famous
Showin’ up to court twistin’ fingers
If rap was a sport, we was ringers
Gotta lose it all just to make it
God giveth, God taketh, strip you naked
Shake the devil, get the cake